And I mean queer in the way we said it in high school...you know back in the 70's.


Yesterday I saw a purse with a photo on it over at Jessica Claires. She wasn't selling it. She took a picture of a woman who was carrying a similar purse to the one pictured. The woman was celebrating her 50th wedding anniversary and she had the most lovely picture of herself with her groom....vintage, of course, donning the side of her fabulous purse.
It looked like Brighton to me.

So, I had to find out where to get this purse.
And did you know that I am a really good detective?

I am. I found it in minutes.

It is made by Brighton. You could tell that, right?
It's expensive....but as far as photo purses go...it's mighty fine.

So. What do you think?

Is it cool or is it queer?

I will not be offended if you think it is the dorkiest thing you ever saw.

But, I kind of like it.....and am dreaming of what photo I would put on the side.

A few weeks ago, during a little get together, Amy J shocked Lynn by mentioning that from time to time
she serves her family T.V. Dinners. Lynn was shocked that T.V. Dinners were still being sold.
In fact, they were very far off her culinary radar and didn't even know where to find them.

Nancy, Amy and I are on much more familiar terms with the frozen food aisle, it seems.

Not a week goes by without a frozen pizza, frozen cod nuggets, or frozen bagels around here.

Less frequently, but just as beloved are the frozen Toaster Strudels and Chicken Pot Pies.

Actual T.V. Dinners. I can't remember a time I served them to my family.
I must have just once or twice.

For the novelty of the whole experience.

But I am sure it was before microwaves.

I am from the metal tray days. Four compartments. Not three. Not two.

And my favorite and the only one I would ever eat was the Turkey with gravy and mashed potatoes that had the cherry strudel dessert.
I'm sure it had peas or some other disgusting vegetable that I would not eat.
But the other stuff was yummy. 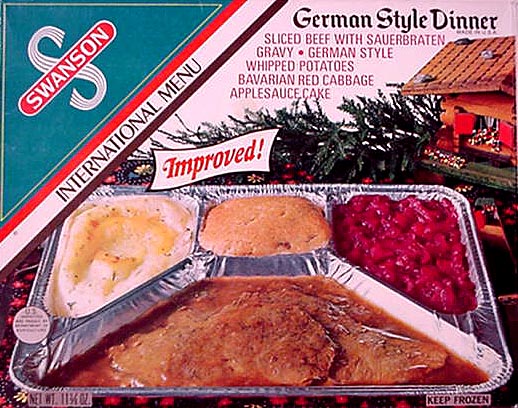 Oh look! International dinners. I wonder what other countries we could have explored the Swanson's way???


Stouffer's and Lean Cuisine are just new versions of the frozen dinner, aren't they.
And so is Schwann's.

(And now that I am thinking of food in compartments. Katie begs me to buy her lunchables.
I think she has had three. Poor deprived girl.)

We love Schwann's beef and mashed potatoes and gravy around here.

But Swanson's, they are the original and they are still in business.


"Ponder well on this point: the pleasant hours of our life are all connected by a more or less tangible link, with some memory of the table."
Charles Pierre Monselet, French author (1825-1888).


Have you ever had a T.V.Dinner?

Which dinner was it?

Don't forget to tell me what you think of the Brighton Photo Purse.