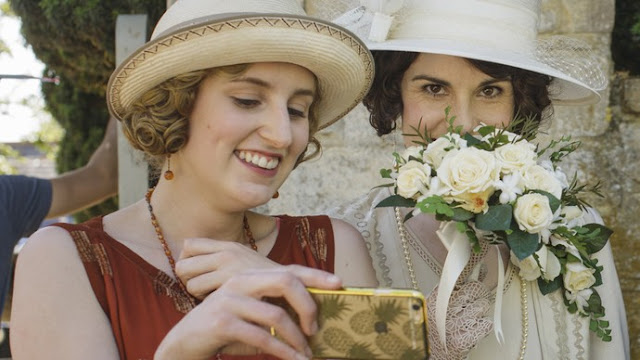 behind the scenes....
you know they are best friends

Oh man.  I always stand up for Mary and after last night I knew the hate for Mary would be real!

If Mary was not Mary, she would have met with her sister privately and strongly advised her to tell Bertie the truth.

But this has never been something Mary could do.  In fact, she behaves badly to her father and Edith in last night's episode.

We see Mary at her very worst.  Doing the most despicable thing to ....poor Edith.

Edith, who would have a place of superiority over the whole family!!!
AND LOVE.

Oh my gosh.  How brilliant was that!

(One more episode so I still have HOPE!!!)  But there is no was around it Mary was truly awful last night .....and then she gets the happily ever after!  UGH!

(but I don't have to like it and it was almost impossible to be happy for Mary after her hateful behavior.)

And Barrows. Oh my gosh.  So sad.
But then Mary and Master George coming down to visit their lonely friend...
and Mary realizing (and me too) that they are two peas in a pod.
I loved the kindness shown Barrows...and I liked that Carson admitted that he had judged Thomas wrongly.

Okay....I have to start listing...
This episode was jam packed with great Downton moments.... 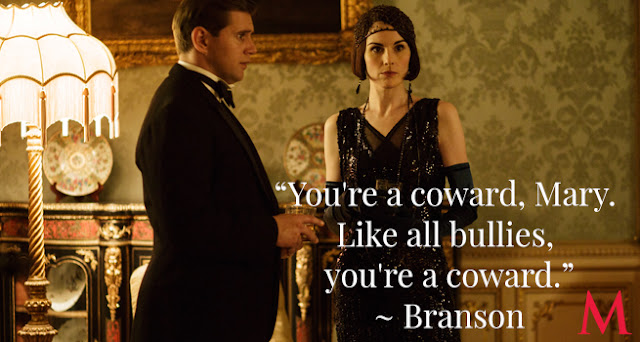 Mrs. Patmore and her terrible, horrible, and apparently hysterical dilemma...
Cousin Violet and her climb up the stairs to converse with Mary. Perfection.
The real reason becomes know.... 'Crash Widow".
Edith's face when Mary came in the room and found that Henry had left...and she knew....she just knew.... the end was near.
Mosely winning over the classroom by sharing that he was in service.  And Daisy listening in and telling the staff how well he did....and everyone cheering :o)
Mary's ugly wedding dress.
That ugly thing on Mary's head.
The beautiful pastels on everyone else.
Sprat. Bananas.
(I like the crew at the paper and I wouldn't mind a show about these gals!)
Edith coming to Mary's wedding....and Edith talking about what they share...
Tom.  Such a great brother in law.  I'm really thrilled they brought him back.  He has been a delightful matchmaker and meddler.
I hope Tom works his magic and gets Bertie back to Downton.
Isobel being sweet and holding Mary's hands at the cemetery.


What am I forgetting?  I cried at least four times last night.
I don't usually cry watching Downton but Fellows is pulling all the strings and
the fact that this lovely experience will soon end may be adding to the emotions. 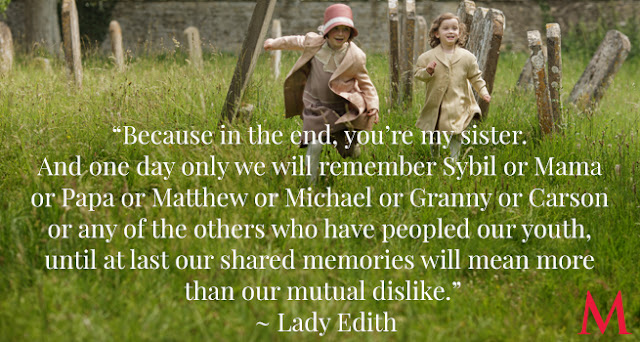 I didn't know...but it was Sybil's grave the children were playing around.

Oh my goodness.  One more episode.

Mary and Janet are in need of comment therapy.
Please share your Downton Abbey musings in the comments.