In which my husband and I handle things differently. 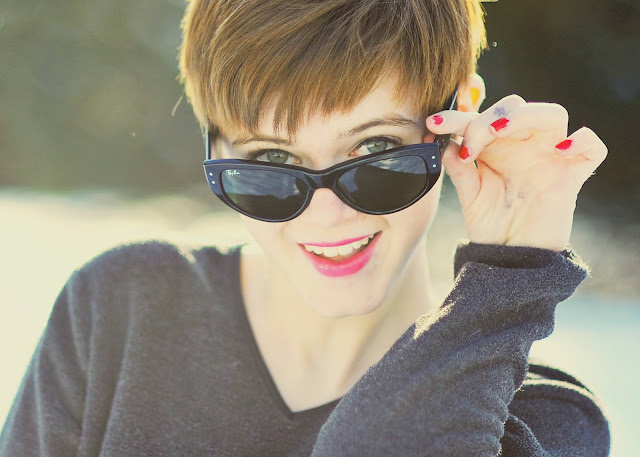 At the end of last year, at school, I left my sunglasses in a black bag (that each of us use at school).
I was pretty sure I left them behind.  I was not concerned enough about them to go looking during the summer.   When I arrived this morning to SUB at my old school I looked for the bag but it was being used.  Which it should be, by one of the new assistants.

When I was outside, I visited with the other assistants.
And it didn't happen instantly...but it kind of dawned on me when I spotted the 'Ray Ban' signature on the side of the glasses worn by a new assistant.
Cat eye Ray Bans.  I've never met anyone who had this pair.
But here they were.

I absolutely did not say anything about it.

Glad she likes them.

When I told Patrick....he had a very different take!
"You didn't get them back?!?!

No....
what if they weren't mine....
(and as I look at this picture...they are black and maybe the ones I saw today were tortoise shell)
blah, blah, blah,

and then he told me that one day a few year ago he saw someone at work drinking a Mountain Dew,
and he knew it was HIS Mountain Dew.
He pointed at the pop and said in a gruff voice, "Is that MY pop?"

And the startled woman said.....
'Oh, they are not for everyone?'
She offered to give it back, half-drunk.

He can not believe I did not ask for them back.
I couldn't do it.  Those words could not come out of my mouth.

I'm not ticked.
They looked cute on her,