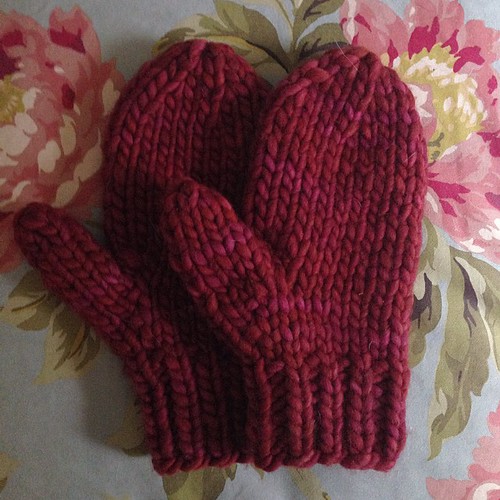 I found this pattern at the yarn store...they said to get it for free on Ravelry.

It is called Quick Bulky Mitten by Aimee Pelletier.

See that ribbing?  That takes minutes to knit.  The needles are so huge and the
yarn so fat!

You only cast on 20 stitches.  So super simple.
We decided to try these as a learning project for Emma.
She finished one mitten really quickly and then we realized that the needles were too small...
8's and 10's.  So I undid it and she will try again when she gets the bigger needles.
The pattern called for this exact yarn and those sizes...I don't know what could have gone so wrong.
But I've adjusted it to work out.

I knit this pair for Katie yesterday in an hour or two.

I will make some for myself next in Blue Sky Alpaca.

The above yarn is called Malabringo Rasta.

Perfect day to make mittens.
There is a chill in the air and drips falling from the sky.