The tales that really mattered.

Emma sent this amazing quote to me this morning.

I FINALLY watched The Lord of the Rings trilogy.

It was on TV one Sunday and I started watching and thought I would give it a chance.
I didn't actually watch ALL of it.

I watched the good parts version.

I recorded all three/four movies and then I fast forwarded thru all the battles and creepy monsters.
I could not look at the Gollum.  He was too gross for me to look at.
I would watch him for a minute to get the gist and then I would fast forward to Sam and Frodo talking or any of the hobbits or Aragorn.

I did love the storyline of friendship so very much. 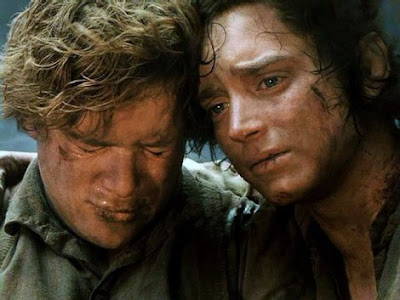 “I don’t like anything here at all.” said Frodo, “step or stone, breath or bone. Earth, air and water all seem accursed. But so our path is laid.”

“Yes, that’s so,” said Sam, “And we shouldn’t be here at all, if we’d known more about it before we started. But I suppose it’s often that way. The brave things in the old tales and songs, Mr. Frodo, adventures, as I used to call them. I used to think that they were things the wonderful folk of the stories went out and
looked for, because they wanted them, because they were exciting and life was a bit dull, a kind of a sport, as you might say. But that’s not the way of it with the tales that really mattered, or the ones that stay in the mind. Folk seem to have been just landed in them, usually their paths were laid that way, as you put it. But I expect they had lots of chances, like us, of turning back, only they didn’t. And if they had, we shouldn’t know, because they’d have been forgotten. We hear about those as just went on, and not all to a good end, mind you; at least not to what folk inside a story and not outside it call a good end. You know, coming home, and finding things all right, though not quite the same; like old Mr Bilbo. But those aren’t always the best tales to hear, though they may be the best tales to get landed in! I wonder what sort of a tale we’ve fallen into?”

“I wonder,” said Frodo, “But I don’t know. And that’s the way of a real tale. Take any one that you’re fond of. You may know, or guess, what kind of a tale it is, happy-ending or sad-ending, but the people in it don’t know. And you don’t want them to.”

A great story of friendship and sacrificial love.
Beautiful wise words about life and circumstances.

No wonder The Lord of the Rings is beloved.