Chick Peas are all the rage.

Every where you go you can find chick peas, garbanzo beans, hummus....falafel.
It's all the same thing and it's big foodie news.  Right up there with ...icky kale.

When we lived in Marinette, when the children were young, my next door neighbor for the first few years was a young mom named Ann.  Ann went to kindergarten with Patrick.  She and Tom had children about the same age as ours.  In fact Erin and Emma are only two weeks apart.

For a while there, Ann and I would get together for lunch.  We would make recipes we found in magazines and in the newspaper.

Ann made this Greek Chick Pea salad and wrote out the card for me.  I loved it right away. 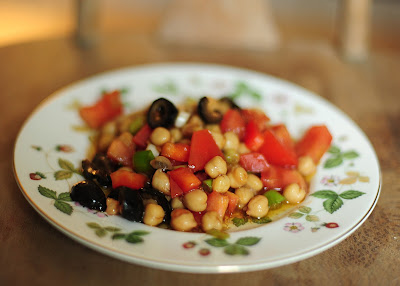 Good and good for you.

p.s.  I told Emma that chick peas make 'one' gassy.
She said, they make everyone gassy.