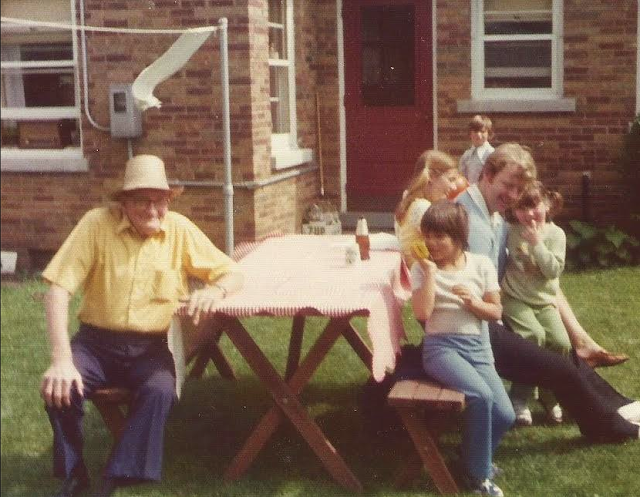 I am not a huge fan of candid pictures.  You will notice that's not what a shoot.  But, gosh,
they sure can show a better idea of real life.

This picture was taken in our grandparent's backyard in Oak Lawn, Ill. Circa 1974
That's grandpa Hansen wearing the hat.
His name was Carl and he came to American from Denmark.
He is smoking a cigarette. He had a terrible, loud, persistent cough.
He loved to garden and had the MOST bristle-y beard.

Behind him I see a towel drying on the line and a radio.
Grandma Hansen loved music.  She was always listening to what she called jazz.
Two other things I notice are the brick on the back of the house...they don't do this now.  Most builders in the Midwest only put brick on the front of the house.
And the pack of 7UP on the back step.

There is Janice wearing a top I remember.  That's our brother in law Binky.  He was a good sport to be hanging at the Grandparents.  He was only about 25 at this time.  Behind him appears to be a Michelob bottle.   What do you think?
Cousin Kelly is sitting on Bink's lap and cousin Johnny is standing up with his shirt collar buttoned to the top.
Probably the last time he wore a buttoned up shirt.
That's me in the yellow behind Bink.   I have on huarache sandals  ...
I learned about these from my friend who moved to Arizona.

A slice of life.
Caught on camera.
It's pretty cool.

Maybe I'll try to shoot some candids.
I wonder who took this?