And for best dressed in the long program.....

I am going to assume you know who won the Ice Dancing last night.  The young American couple Davis and White won the gold medal.  They skated perfectly.  I liked their short program better because of the speed and the music...and the dress....but that's just being picky.  After watching 15 couples skate yesterday afternoon I do believe the couples who won gold and silver really were the best!  The couple that skated to Les Miz have much going for them but did anyone else notice how awkward their lifts were? The girl looked like she was crawling up a mountain to get up on her partner's shoulders.  And then she would strike a grand pose.  And her poses on top were GREAT.  But the whole climbing up thing was terrible.  Do you think someone will tell them?

Following are the best dressed of the night.

Canadians. Music choice ?.  Gorgeous.
I have to wonder if they had different music if they would have won?  The Americans danced to Shahrazad and it was eh....But I can't even remember what Tessa and Scott skated to.  I think I liked their skating best.  They won the gold four years ago so they are no slouches. 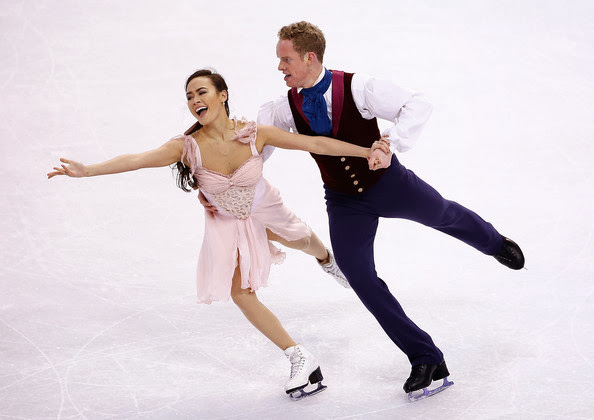 Here is the couple that had the awkward lifts.  They had my favorite music of the night...and look how lovely she is!  They are young and with a little lift help I think they have a future in the sport.  (take my advice!)  I think they came in 9th.

Oh Ice Dancing....you are my best.