Downton Abbey vs The Super Bowl

Congrats to my dear friends who live in Washington and cheer for the Seahawks!  Those friends who have waited a long time for their team to win their first Super Bowl.  My condolences to the Broncos.  Oy.  That was just so hard to watch.  How could a team get to the biggest game and play so horrible?  Not only did they make themselves look terrible...they made the whole AFC look BAD.  I was thrilled to be able to change the channel and watch a charming episode of Downton Abbey.

But first.  Joe Namath. (He is a former NY Jet.  They called him Broadway Joe.)

This was the funnies tweet I read last night from WSJ writer Jason Gay: 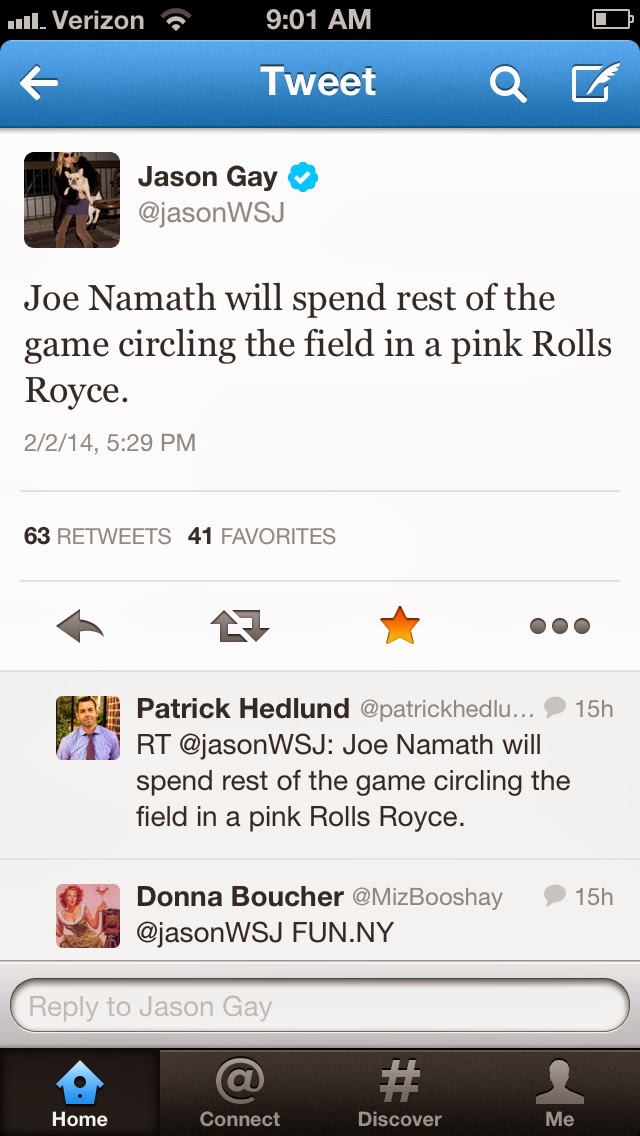 And that, folks, is entertainment.

On to Downton Abbey, I know that many of you are playing catch up with the show and I am tempted to wait until tomorrow...but I'll post a few thoughts today and feel free to chime in whenever you have a chance to watch the show.

SPOILERS BELOW THIS PART!!!!

Shall we say this all together.....Poor Edith.
I can not wait to see how her newest predicament is handled.

The nursery scene where Mary and Isobel and Tom shared their love stories was so tender and beautiful.  I loved it so well.

Oh Isobel.  You stole my heart in this scene!

Finally Cora has a fun scene...the restaurant with the snooty host.  How she came to Bates and Anna's rescue and put that doofus in his place.  Loved it.

I had to look up the Dowager's butler (Spratt) because I have seen him before...and I remember him playing a dopey character.  I found it....Vanity Fair mini series...He played Jos.  His name is Jeremy Swift and I bet you recognized him from something too.

Oh when the Dowager hired Pegg back and Isoble had to ear crow.  Oh boy!
What do you think Pegg is short for?  He doesn't have a Peg leg does he?  heh.

I wasn't at all interested in Napier's colleague nor in his conversations with Mary.  Maybe I will like them better upon a second viewing.

Oh my! Carson and his inappropriate comments to Jack Ross.  Interesting.

I liked a few of the cute quips from Lord Grantham and his lively niece, Rose.

It was a good episode.

What is to become of Edith and the baby?  I can't wait to find out.

Thanks for stopping by and leaving your comments.
I love hearing from you all.

P.S.  I want the wallpaper from the nursery.  Suzy had it in her bathroom and she like it a whole bunch.
Makes me want a little toile wallpaper.