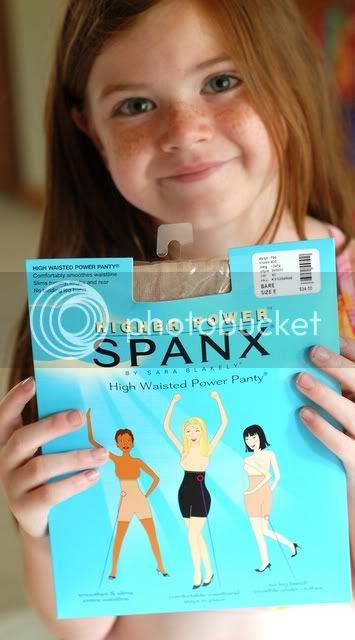 Higher Power...
You're darn tootin'.
Whatever that means :o)

It's gonna take a higher power to hold in my tummy!

I haven't tried them on yet.

I'll tell you tomorrow if they work for me.


It is always possible to be thankful for what is given rather than to complain about what is not given. One or the other becomes a habit of life. There are, of course, complaints which are legitimate–as, for example, when services have been paid for which have not been rendered–but the gifts of God are in an altogether different category. Ingratitude to him amounts (let us resort to no euphemisms) to rebellion.

Many women have told me that my husband’s advice, which I once quoted in a book, has been an eye-opener to them. He said that a wife, if she is very generous, may allow that her husband lives up to perhaps eighty percent of her expectations. There is always the other twenty percent that she would like to change, and she may chip away at it for the whole of their married life without reducing it by very much. She may, on the other hand, simply decide to enjoy the eighty percent, and both of them will be happy. It’s a down-to-earth illustration of a principle: Accept, positively and actively, what is given. Let thanksgiving be the habit of your life.

Such acceptance is not possible without a deep and abiding belief in the sovereign love of God. Either he is in charge, or he is not. Either he loves us, or he does not. If he is in charge and loves us, then whatever is given is subject to his control and is meant ultimately for our joy.


Let thanksgiving be the habit of your life.

I tend to me more the critical sort.
Bet you don't believe me, I'm so sweet and encouraging on the Internet.

But you don't rub me the wrong way or argue with me or ask much of me.
Then I will focus in on your faults like nobody's business.
Not so sweet.
Not so encouraging.

I always admire women who speak highly of their husbands.
Recently, I realized, that it is more about them, than their husband's worthiness.

And I think it is because they are thankful for what IS given.
Not for what is missing.

It's hard to even notice the good when you're staring so hard at the bad.

Thanks to Dana for telling us about Paul in the comments!


Interesting and beautiful video of 500 years of Women in art.
Women in art
~you tube