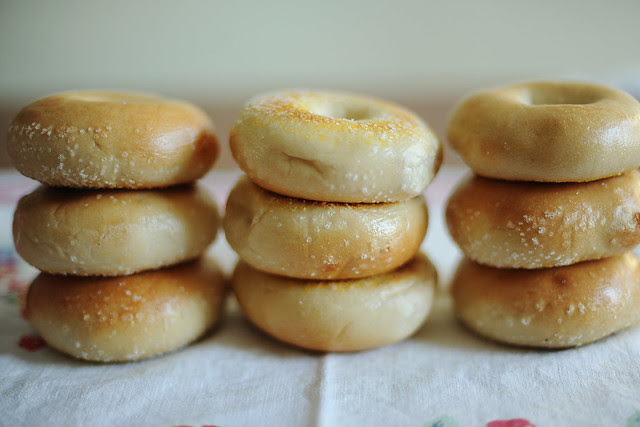 When I was a little girl my Dad worked for his Dad at a big bakery in Chicago.   The bread was packaged in wax paper.  It was different than grocery store bread.  It was wholesale bread; for restaurants.  Along with brownies and Neapolitans and cookies with paper pictures of Santa, Dad would bring home a bag of hard rolls.   I think it was called the baker's dozen (13 rolls) or Bake and Serve.
In this bag came a few kaiser rolls, some other rolls, and one roll shaped like a little banana, kind of a crescent.  Maybe it was a crescent roll. That's sounds right.  Crescent.  Not croissant.  But what was special about these little crescent rolls, besides the fact that there was only one in a bag, it had kosher salt on it.
But the salt was in a small packet and was sprinkled on the roll just before baking.  It was the best roll.
With seven people in the family it was coveted.  Maybe mostly by me.  I clearly remember sitting at the table and hoping to snag the precious salty roll.

(Ya know.  My dad could have made a whole bag of those for us. Why didn't he think of that?)

Anyway.  Soft pretzels were not popular treats in the suburbs of Chicago.  So I never satisfied my salty bread kick with those.

But one day, I do not know when or where, but I stumbled upon a salt bagel.