Apple. You're going down.

Last night as I viewed Mac commercial after Mac commercial I determined that Apple is involved in false advertising. They state over and over: one reason to by a Mac is that "they don't get viruses and they don't crash."

Imagine my glee in hearing that claim when only 30 minutes before I was told by the young lady working at the Apple store that " We don't make the hard drives. You never know if they will last one day or ten thousand days."

"You put it in your machine. I paid a thousand dollars more for this machine thinking I was buying the best and now you tell me that you can not promise me more than one day???"

Then she proceeded to tell me about all the backup software they sell.
That is not the point.

The other thing that makes me mad at Apple is that they are touted as being so intuitive. To tell you the truth, I do not know what the heck they are talking about.
Our Windows machines let you know if you are nearing some sort of break down.
This machine. Not a word. Dead in the night without a message of warning at all.

We were also told that Mac does not do hard drive retrieval service.
They tell you that you can send it away and it will cost $800 or more.

There is a chance that the 'genius' at the store will be able to get some information off of the hard drive.

This is my hope.

But with my experience of false advertising, rude service and a bad machine, that hope is slim.

I will be looking to see if there is a class action suit against Apple for false advertising.

I propose a new slogan for Apple;

Here endeth my Apple rant. I will not rant again about it here.
But if you would like to join me in my fight against the hip computer giant, let me know. 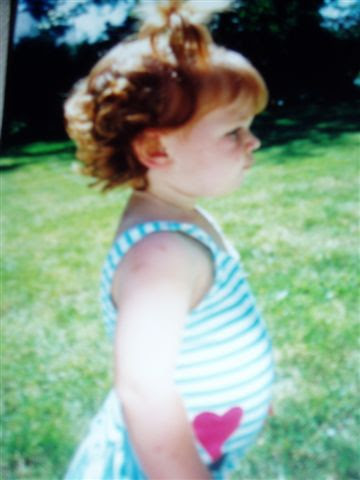 Look! She had curls. And that tummy!!! Did you ever see anything so adorable in your life?? I bet you did. On your own babies :o) he he

I found this gem in the files on the basement computer.
This picture is my silver lining today.

Oh my goodness. I can not get over the cuteness of her.

Let's talk about those curls. Those are baby curls.
I didn't cut Emma's hair until it was down to her bum. I couldn't cut it because at the very end of her hair was a curl. Her hair flipped up at the end. Just like I had curled it. Her bangs, that had been cut many times at this point, were straight. So I knew that when I cut off that lovely curl at the end, it would be the end of the baby curl.

I finally did cut it and saved it. Her curls in a white envelope.

Precious babies and their curls.
I think, I will think abut that today.