The Man in the Arena
“It is not the critic who counts: not the man who points out how the strong man stumbles or where the doer of deeds could have done better.  The credit belongs to the man who is actually in the arena, whose face is marred by dust and sweat and blood, who strives valiantly, who errs and comes up short again and again, because there is no effort without error or shortcoming, but who knows the great enthusiasms, the great devotions, who spends himself for a worthy cause; who, at the best, knows, in the end, the triumph of high achievement, and who, at the worst, if he fails, at least he fails while daring greatly, so that his place shall never be with those cold and timid souls who knew neither victory nor defeat.”
Teddy Roosevelt, speaking at the Sorbonne in Paris, April 23, 1910
I was watching the new Katie show yesterday afternoon and the author of Daring Greatly said that she got the name of her book from the above poem/speech.
I have never heard it before but it is very inspirational, isn't it?

(I just went to check and see what Ree's website said about this book. I remember seeing a picture of the book Daring Greatly over there.  Ree shared the same quote.  I swear I didn't copy. I really saw it on Katie.)

Ellen sent these little boys, who love the Presidents, to the RNC.
Scotty Hamilton asks one boy 'what is better than hope?'
The little boy thought about it...
and said. 'Love.' 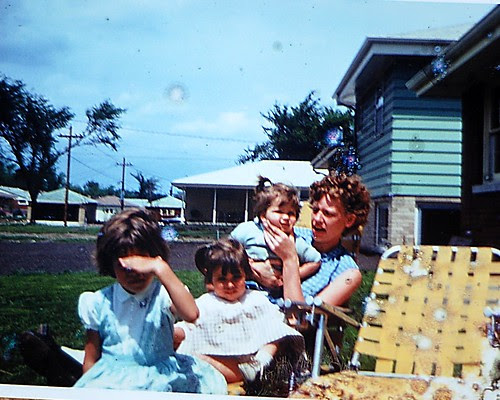 The Mom in the Arena.

Nancy in front.
Sue behind her.
Me being held by a thin, young, curly headed Mom.
Esther Jean.
A 24 year old Esther.

I think Jimmy took this picture.
It is a slice of life and I love it too much.

So much to love about it all.