Appetizer
What does the color pink make you think of?

Soup
Name something you thought you had lost, but later found.

Salad
In 3 words, describe this past week.

Main Course
What are you obsessed with?

Dessert
What kind of perfume or cologne do you like to wear?


Grey's was a rerun...so let's see if we have any opinions about
the American Idol results show. :o)

First, I have a question.

When Ryan brought Jordin (sweet 17 year old girl from Arizona) and Leslie (Chicago)
up for judgement, did he say Jordin was in the bottom two or was it just implied?

Ryan said, 'Are you surprised to be here?' implying that they both had low votes.

The first girl to be sent home said something a little snippy to Simon but Ryan didn't pick it up and make a big deal out of it which I think as a relief.

I really don't want to listen to the snipping.

No shocks for me last night.
Lots of the time better singers go, due to votes.
And to be honest with you I fast forward through many of the preformances.
( I even fast forwarded through Melinda's song. I just didn't like it at all.) 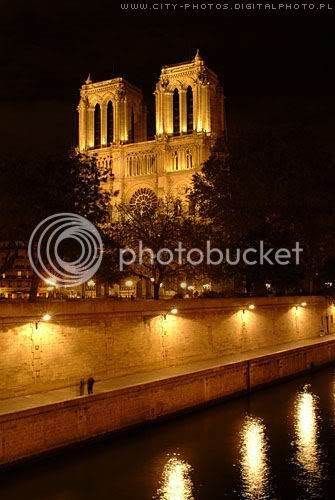 Paris at night.
The city as art.

Notre Dame
The Eiffel Tower.
The Louvre.
The Seine.
The Arc de Triomphe.


The architecture in Paris will be a bountiful feast.


Four weeks from today(at almost the exact time I am writing this) we will land in Paris.

Patrick's passport came on Wednesday.
Mine didn't.
You don't know how this makes my stomach feel!
I do not like my traveling ducks to be out of their neat little row.