Last night the Golden Globes were on.
Usually, I come here with the parade of pretty fashions.

So last night I sat down with my little paper to jot down who I thought was well dressed.

How can that happen?

HOWEVER, it was the best award show I have seen in years!!!

I knew of the winners, I had seen and raved about the winning movie and even my favorite television comedy won.

I will share with you a short recap of a great night at the Golden Globes. 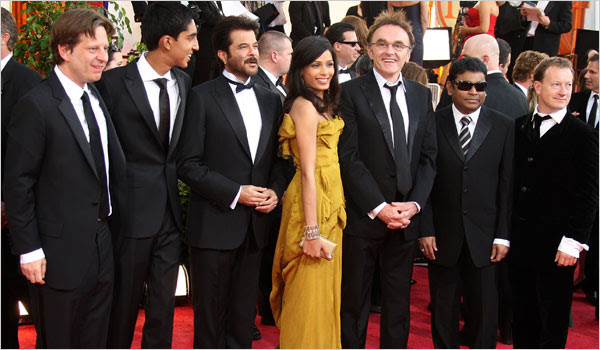 It was the big winner of the night as far as movies go and I was so delighted!


Here is the UK trailer. It gives away the least of any trailer or clip I have watched.

If you are curious to find out more or listen to music from the movie, youtube has many clips.
Just be warned that most of them give away so many of the 'answers' and I really thought that was part of the movies brilliance.

And as I said before. The answers are hard and tragic and raw, so while this looks like a happy movie and it does have it's happy moments, it is sometimes hard to watch and intense. 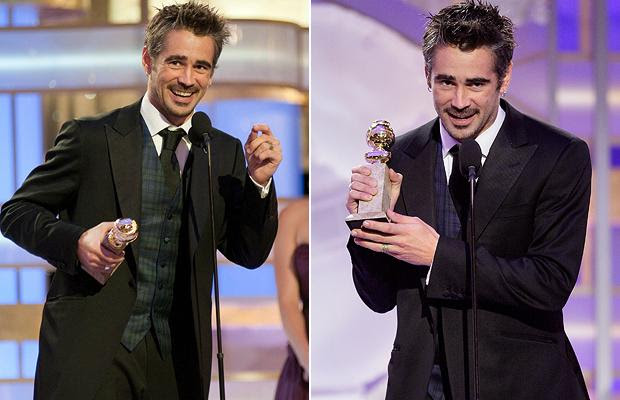 Our (Patrick and me) second favorite movie of this year was In Bruges.

I was surprised to see both of the male leads nominated for best actor.

Colin Ferrel won. He is a rascal. I think he should win best dressed with that clever plaid vest.

In Bruges is a well written, well acted, beautifully photographed, violent movie.
If you enjoy dark, dark comedy with an amazing story line. This movie is for you. 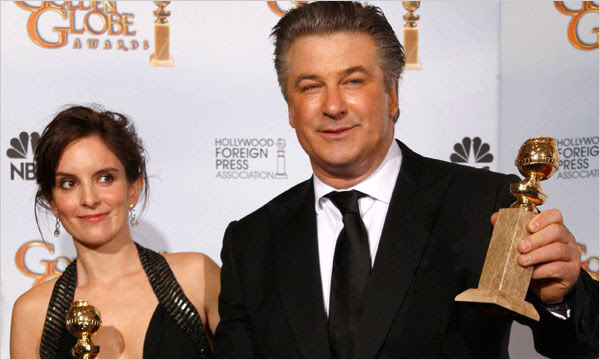 And then 30 Rock won for Best Television Show and Tina and Alec won for acting!

How talented are those two actors. And that Tina! She really is brilliant! 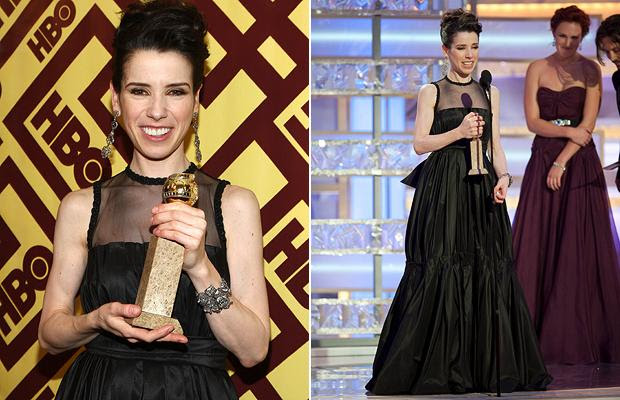 And this is Sally Hawkins. She won best actor in a movie I have never heard of. Can't really remember it now.

BUT, I am well acquainted with Sally due to her role in Jane Austen's Persuasion. I have watched that Masterpiece theater
movie about ten times since it aired last winter and I Tivoed it.

It was a hoot to see her be someone other than the strange looking mousy girl in Persuasion.

But she was determined and could not be persuaded otherwise in Persuasion and I love her in it!

And look! Has teeth and can smile.

Oh and this hairdo is so much prettier.

This is the ending of Persuasion. It is a long awaited kiss.
And well, it seems to take eons to connect :o)

But the music in the background and the lovely words and feeling are what keep me returning to this drama.
That...and her wedding gift.

And I would like to give a special Golden Globe to and actor who appeared in FOUR of the award winning movies last night and was nominated for best actor.

Ralph pronounced Rafe, acted in In Bruges, The Duchess, The Reader, and Bernard and Doris for which he was nominated.

So. Congrats Ralph for having an amazing year on film. Your remarkable work did not go unnoticed.

Why on earth were you not in Slumdog Millionaire?


On to the Oscars, where I am sure Slumdog Millionaire will again do well.

And I can keep my fingers crossed that the designers clear their heads and design some pretty dresses.

Our blog-sistah's Angie and Amy have started a photography blog!
They will have weekly photography contests.
Stop by and enter!