Once upon a time there was a girl named Farrah.
She married the 6 Million Dollar Man.
She was from Texas.

She posed for a poster in 1976.
It sold millions of copies. 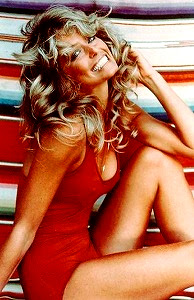 The rest is television and media history.
She was on Charlie's Angels and played Jill Munroe, the sporty one.

Her hair and her teeth were epic.

I would have thought everyone knew this...
but not everyone is as old as I am and grew up glued to the boob tube,
like me.

(as hard as this is for me to imagine)


In the movie Being There, Chance the Gardener is mistaken for a brilliant philosopher.
He is really a simpleton who watches TV all day.

Just before he goes on the 'Johnny Carson' show, Hull tells Chance the following;


Morton Hull: Do you realize that more people will be watching you tonight, than all those who have seen theater plays in the last forty years?
Chance the Gardener: Why?

My mind is a steel trap for useless information.