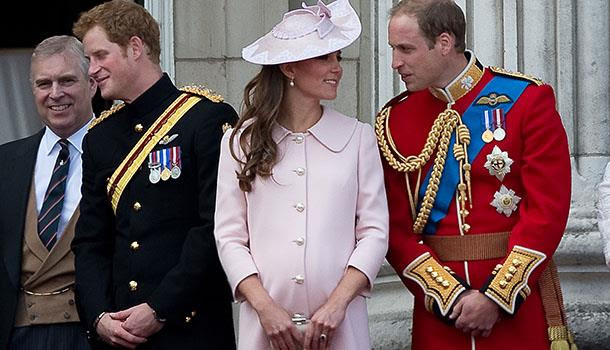 I thought it would be fun to name the royal baby.  Catherine is due this week.  We better get to it!

This is a list I read on Hellomagazine.com this morning.

Alexandra — One of Queen Elizabeth's middle names, Alexandra is a steady favourite for the royal baby with odds as high as 2/1 at one point.

Charlotte — A fashionable name among royal circles, Charlotte is the name of the wife of King George III, Queen Charlotte, and also the middle name of Kate Middleton's younger sister, Pippa.

Elizabeth —The Christian name of the current Queen is a likely choice of middle name for the royal baby, to pay tribute to Prince William's grandmother. Elizabeth is also Kate's middle name.

Diana — Prince William may want to pay tribute to his mother, the late Princess Diana, who was well known internationally for her fundraising and charity work. The name means "divine" in Latin and could be a fitting middle name for the royal baby.

Victoria — Queen Victoria was the longest reigning monarch of the UK, which could inspire Prince William and Kate's choice for their first child, the third in line to the throne.

Caroline — A popular name in royal circles that was brought to England by the wife of King George II, Caroline of Ansbach. The eldest daughter of Prince Rainier III, Princess Caroline of Monaco, also takes the name.

Mary — The royal baby's middle name could be inspired from the famous wife of George V, Queen Mary, who was crowned in 1911. Mary quickly became a favourite in the bookies this year after a mystery man in a top hat placed a hundred-pound bet on the name on his way from the Royal Ascot.

George — George has been the consistent frontrunner for the male heir with odds running around 12/1. There have been six King Georges reigning over England including the present Queen's late father who was born Albert but chose to be named King George after his coronation.

Edward — Edward is an old English name meaning "wealthy guard" that has been used in the royal family since the 11th century. The name would honour the youngest child of Queen Elizabeth, Prince Edward.

Charles — Prince William and Kate may want to pay tribute to Prince William's father, Prince Charles, in the form of a middle name. There have been two Kings of Britain named Charles, with the name deriving from the French word for "Manly".

Harry — Another possibility is that Prince William will pay tribute to his brother, Harry, whose name is used as a nickname of Henry and Harold and means "home ruler".

Francis — Kate's father's middle name is Francis, and Princess Diana took the female equivalent, so the royal baby may be named after both.

Michael — Prince William and Kate may choose Michael as a middle name, after Kate's father, and reminiscent of the Queen's cousin, Prince Michael of Kent.

*****
Wasn't that nice for Hello Magazine to make me such a nice list.

If the baby is a boy.....my best guess is Phillip Charles Michael Francis

If the baby is a girl....my best guess is Charlotte Caroline Diana Francis

I see them going traditional.
I just can't wait.

I guess the baby will be born on Sunday July 14, 2013
For the child that's born on the Sabbath day is fair and wise and good and gay.

What do you think??