My Grandpa Glyman came to the United States from Greece.  Naxos to be exact.  I don't know much about his life but after a life time of not knowing I have learned the proper spelling of his original name; Glymakopoulos.  When I was little I asked my dad why grandpa changed his name.  My dad always said, "because it was too hard to spell."  I thought he was joking.  He was a real tease.  But maybe that is the reason after all.

As far as I know Grandpa Glyman bought properties and rented them.  He had buildings and businesses in Chicago and bought land in the country.  You know, Naperville and Barrington.  He had a good head for business and was quite good at what he did.  But to me, Grandpa was a bakery owner. He was not a baker.  He worked in a dark and smokey office that was very cold.  All of his children worked at the bakery.  It was a big factory bakery.  Trains delivered the flour.  The bags of flour were then stacked as high as the ceiling.  Too high for me to climb on.  A mountain of flour.

The bakery was called Golden Hearth/National Baking Co.  Golden Hearth was a commercial bakery.  Restaurants all around Chicago-land carried 'our' products.  When we went out to eat in Elmhurst, we had buns baked at grandpa's bakery.  Delicious crisp crusted kaiser rolls.  The sweets department was not like what we see nowadays, it was pretty limited.  They made eclairs and brownies and napoleons, fancy cookies with paper images on them and the most wonderful birthday cakes.

Two things I knew growing up

1. My dad wished he had gotten the McDonald's account.  This was before they were big.  This was in the 60's.  He had a hunch.

2.  Mary Ann's was the competitor.


I didn't know how much my dad made or if he got along with his father.
But for some reason, I knew Mary Ann's was the competition. 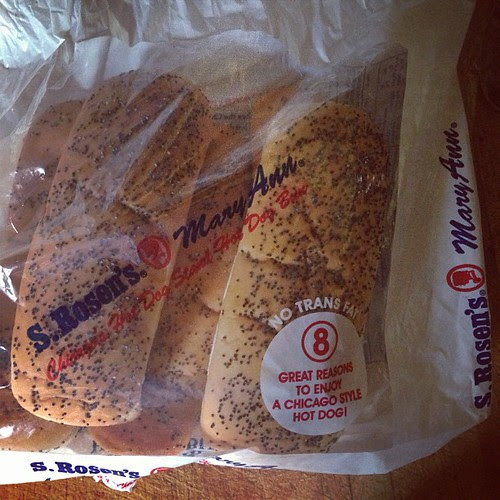 I bought these from Target on Monday.  They were the only package sitting in the empty spot on the shelf.  If you have eaten a hot dog in Chicago, you have eaten it on one of these buns.  No doubt.

I didn't hesitate. I bought them.
What a neat thing to find at Target.

A Starbucks Chai and nostalgia in one quick trip.