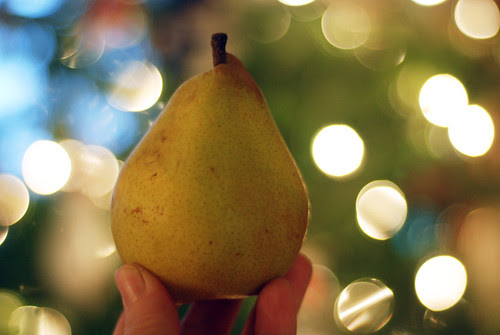 "..From 1558 until 1829, Roman Catholics in England were not permitted to practice their faith openly. Someone during that era wrote this carol as a catechism song for young Catholics. It has two levels of meaning: the surface meaning plus a hidden meaning known only to members of their church. Each element in the carol has a code word for a religious reality which the children could remember.

-The partridge in a pear tree was Jesus Christ.

-Two turtle doves were the Old and New Testaments.

-The four calling birds were the four gospels of Matthew, Mark, Luke & John.

-The five golden rings recalled the Torah or Law, the first five books of the Old Testament.

-The six geese a-laying stood for the six days of creation.

-The eight maids a-milking were the eight beatitudes.

-The ten lords a-leaping were the ten commandments.

-The eleven pipers piping stood for the eleven faithful disciples.

-The twelve drummers drumming symbolized the twelve points of belief in the Apostles' Creed."


I lifted this right off of tj's blog. Isn't it great!
I really never liked this song. At all.

But I love this idea.

Another idea I love is the fact that Ree (Pdub, Pioneer Woman) is going to be on television today!!!
And on the internet if you don't have cable.

So here's the dealio.

You do the math.


And here is the internet link!
It is not up yet. But it will be, I am sure.


And speaking of Ree, I received my calendars yesterday.

She sent me a few extra, by accident.

I have been blessed with an abundance of Pdub calendars.

Mine has an inscription that says we are BFF.

Well. Not really. But something equally nice.

Thank you for the quotations, yesterday. I liked reading those very much!
We will have to do that again some time.


Perhaps my cred will go up.
I see that I am blogging at a Junior High level. (Thanks to a link at Dana's blog)

Perhaps if they looked into the comments I would make it to the high school or college level!


See you in the comments....folks are chatty and busy here in my quiet little space this morning.
Can't think.