A few weeks ago Katie and her friends, Leonie and Sophia had a crazy idea.
They wanted to write letters and ask the President if the word "funner" could be
added to the dictionary.

They were so excited that I didn't want to burst any bubbles so I let them go ahead.
The girls each wrote separate letters. Katie wrote the President Obama,
Leonie wrote to Britannica (Merriam-Webster) and Sophia wrote to Governor Doyle.

They worked very long and hard on their letters. (about two hours)
Sloppy Copies were made first and then the final drafts were penned.
We looked up addresses on the Internet and then the girls addressed their envelopes.

It was like an English assignment.
And Civics.
But they were having fun and were quite determined.

It was funner than watching a movie or playing Playmobile.


Yesterday when I picked up Sophia and Leonie for a short play date,
they showed me this letter: 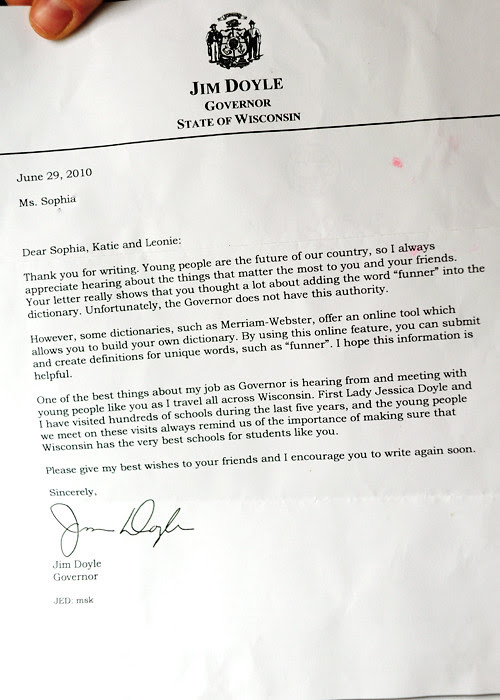 Sophia was especially excited to receive a letter from the Governor!

We all loved the great suggestion given.

Online tool. Very nice.
Thank you. That is very helpful. 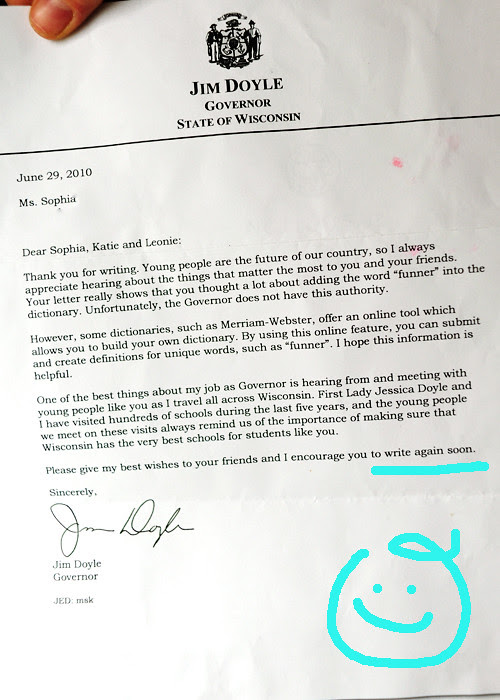 She is planning on it!!!

I exclaimed, "He wants to be your pen pal!"

How's that for fun?
It couldn't be funner!


p.s. my spell check does not think funner is misspelled.
???