My brother in law Paul is a really special guy! The third son in the family.
He loves his family.
(Especially his big brother, Joe.)

He lives and works in his hometown where he frequents the fire dept., Barnes and Noble and the candy machine.
He loves Coke like I love Diet Dr. Pepper.

He likes his meat soft and his tv loud.
He is extremely gregarious.
If he doesn't know you....he would like to meet you.
Especially if you are a bus driver.


So Paulie came to town for the big wedding last weekend.

He sat at our table for the reception and was uncharacteristicly quiet.

He told the groom to be good to the bride.

Then he told two jokes.

The same two jokes he told at Matthew and Melinda's wedding.

The one I can kind of remember went like this;

In marriage, don't forget that there are three rings;

Dinner was yummy and we were on to the dancing and karaoke.

The dj handed out booklets with songs. We all poured over the lists looking for just the right song to try.

Then I spotted it.

The perfect song for Paul.

(He has a very nice baritone and sings Jesus loves me from time to time in church.)

Patrick searched and scrounged for a pen or pencil to write Paul's song and name on a slip of paper.

Thirty minutes later Paul's name was called and he approached the mic.

Confident and cool, he perfectly belted out his song.

He even added dramatic flourish on one of the lines.

Even more impressive when you know that Paulie can not read.

Everyone stood and smiled and cheered.

His beloved mother smiled down from heaven.

So happy and proud were we all!

I have forgotten what every one else sang that night.

But I don't think any of us will ever forget Paul's song.


Who will win Dancing with the Stars.

Seems everyone faltered.
The free style dances were in my snotty opinion. BAD.

The finale is TWO HOURS long.

Sabrina was better than all three of them 'put tugether".

I am still not over that.

And I tried to vote for one whole hour....and never got thru.

So...we shall see if the doll loving Marie fans and gazillion Osmonds all over the nation are able to hand the Disco-Ball trophy to their girl.

I have been disappointed two times in a row with the winners.

It seems only fitting that Marie will beat my Helio.


Stay tuned....I'm sure the show will be a long drawn out snooze fest until the last five minutes.


And by the way, ABC is making so much money on this show...don't you think it is only right that the Celebrity should be given a million dollars for the charity of their choice.

Nylons are a thing of the past, don't cha know. 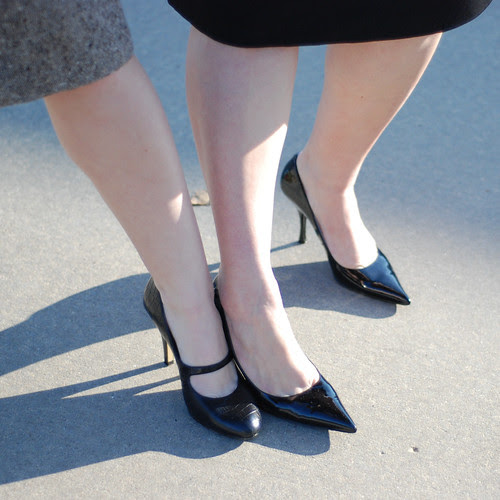 The girls play a little game of....
who has whiter legs,
on the way to the wedding.