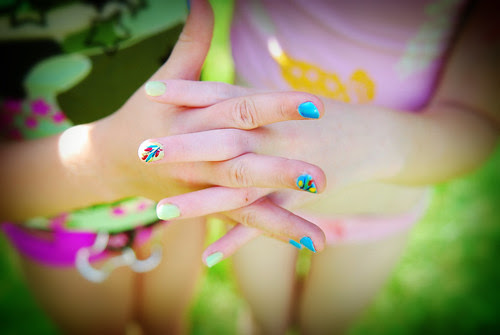 Katie's little friend, Carrie is here for just two more days.
She came over yesterday afternoon and well, the weather was still not quite what we would chooses for June 13th.
And since I had manicures on the mind....
we went to get manicures.

Who knew that Friday afternoon at 2:00 is the big hot time to get manicures?
Not me.

But we waited and I asked one woman to paint both of the girl's nails at the same time...
and I had a pedicure!

I was 'nice' and let the girls pick out their own colors.
This is hard for me.
I want them to pick out pink or red.

But as you can see, they picked out green and blue.

I chose red. Because I am either conservative or a fuddy duddy;o)

When got home, the sun was shining so the girls dashed upstairs to put on suits then ran outside for a few minutes
in the sprinkler. 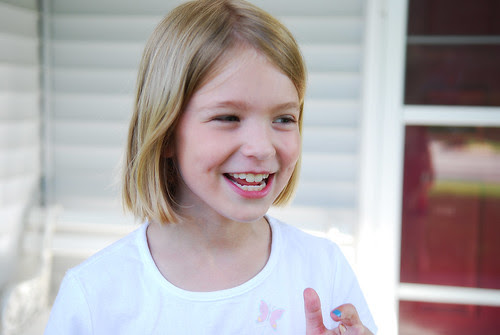 Carrie was telling us about the best movie she has ever seen.
It is called Kung Fu Panda.
She says it is better than Horton Hears a Who.


We will miss you Carrie!
Very, very much!


I was so sad to hear of Tim Russert's passing.

I spent the rest of the evening watching his friends and colleagues talk about him on the tv.

I liked him and haven't been so sad about a celebrity passing since Mr. Rogers.


There is not a day that goes by that I don’t say to my son, ‘You are always, always loved, but you are never, never entitled.’

Russert says he feels blessed to have enjoyed a career that’s allowed him to meet the pope, interview presidents and learn so much about so many subjects. "My dad’s favorite expression is, ‘What a country!’" Russert says. "I look back to see the house I was born in and my dad quit school in tenth grade. The fact that the son of a truck driver and garbage man is now the moderator of Meet the Press, that’s everything you want to know about who we are as a people, society and a country. It’s not very complicated to know me. What you see is who I am. I am just someone who grew up in an extremely traditional lower middle-class upbringing and celebrates the uniqueness of this country every day.

~both quotes from American Profile.com


I pray that God will comfort Tim's loved ones.

Let us endeavor to live so that when we come to die even the undertaker will be sorry.
~Mark Twain


Every second is of infinite value.
~Johann Wolfgang von Goethe


and one for the kids,


Life moves pretty fast. If you don't stop to look around once in a while you could miss it.
~From the movie Ferris Bueller's Day Off