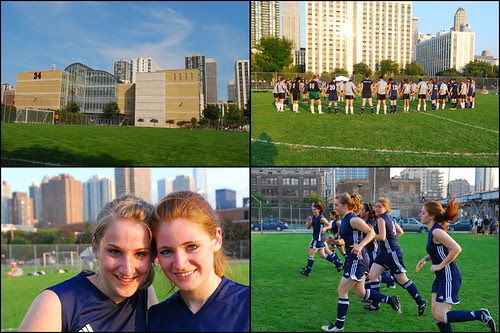 Once upon a time, two little homeschool girls played high school soccer together.
They played on a co-ed team. They often played all boys teams.

These two little homeschool girls were tough, sturdy and skilled.

They were an asset to their team and they loved playing and being a part of the homeschool
soccer team.

As it happens, one of the girls graduated and went far away to college.

This fall they both find themselves at Moody Bible Institute in city with big shoulders.

Where they again play soccer together.

They are still tough, sturdy, and skilled.

So when their club team played a Varsity team for their one and only game of the year....

It was a special delight that those two little homeschooled girls scored the only goal for their college team.