I must tell you 7 random things about me.
I've been blogging for 3 1/2 years.

Is it possible to tell you Seven MORE things about me???

2. One of my favorite songs is "Paradise by the Dashboard Light" by Meatloaf.
Matthew thinks it's shameful that I like this song.
I still think it's brilliant.

3. I bought some perfume in Paris. It is called Nina by Nina Ricci.
It's yummy and my husband likes it. He usually doesn't like the perfume I choose.
Yay.

6. I subscribe to Cottage Living and think it is the best magazine ever.

7. I thought Kris Kristofferson's hands, in the movie 'A Star is Born', were extremely sexy. They still are.

See what I mean?

And here is the promised American Idol story as told to me by long time family friend and cool person, KrisS:

So, we wait in this long long line...and finally get in. We had seats in Section F, row 5, seats 6&7. We thought they might be nosebleed. But there is NO nosebleed. the studio holds 350 people. I have been to bigger weddings!! Actually, we were 10 rows behind the judges. So, we had great seats and could see everything. We had to be in our seats an hour earlier than show time, so we got to see Blakes, Melinda's and Jordin's parents. We saw Brendan/Brandon, one of the first off..try to extend his 15 minutes. We saw Haley Scarnatto. She is BEAUTIFUL!! And Lakisha was there. Ok, can I say that Lakisha is tinier in person...shorter would be the word, AND thinner. She doesn't look anywhere as heavy as she does on the tv. The show is about to start. They name the judges...Paula is about 4'6" and weighs 26 pounds. She is so small that walking through the crowd, you cant see her over the sitting people. Ryan comes out...he is a pencil. Short and anorexic. Then we see the three remaining contestants. Jordin is stunning, and no where as big as she looks on tv. She is just surrounded by short people. Jordin is probably the average height and build for todays teen. Blake is short, and Melinda does not look near as heavy or deformed. It was a real eye opener.
Since the judges didn't have a lot of screen time, during all the film clips, Simon is tipping Paula's chair, playing with her hair, poking her..he is talking to randy, randy is talking to paula, paula is talking to people behind her. If they were students in school, they would get detentions. OH! We saw Simon's girlfriend..Terry. Her waist is as big as my ankle.

Great observations, Kris!
Those are exactly the details I want to know!!!
I'm not kidding.
I have been fascinated with how large Jordin looks!
And it's very interesting to know she's just surrounded by miniature Hollywood types.

I am so glad I live in Wisconsin, where the women have real body parts and tummies and thighs.

Cause in California, they'd try to shoot me down for fear I was Godzilla or something!!!

Dancing to Thriller, just like Jennifer Garner in 13 going on 30. 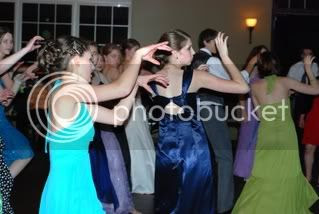 What did you think of the dancing last night on Dancing with the Stars?

I didn't care for Joey in the pink shirt and brown pants.
But I still voted for him, five times.

I liked Apolo's cha cha.
His hip hop, not so much.

Who will get the most votes?

I wish the winners got more than that dopey disco ball trophy.


On with the dance! let joy be unconfined;
No sleep till morn, when Youth and Pleasure meet
To chase the glowing hours with flying feet.
~Lord Byron, Childe Harold’s Pilgrimage


Write it on your heart that every day is the best day in the year. ~Ralph Waldo Emerson