Boy! Was my face red.


Do you remember the magazine Young Miss. It is a small square magazine popular in the 70's?

My girlfriend in Wheaton, Claire, had a subscription to it. One page featured stories that young misses had sent in about their most embarrassing moments. It was called, Boy! Was my face red.
The stories were not horrible. Forgetting someone's name or having a piece of spinach in your teeth was embarrassing enough for a young miss.

Last night at the new family/student get together at Blessed Sacrament Katie found herself living a little girls nightmare.


Everything was going perfectly. We walked in and immediately Katie met two third grade girls. They are not new but their siblings are new and their mothers are on the PTA. They boys begged the girls to come and play tag. And off they ran.
A little too wild and willy nilly for my taste, but I tried to ignore it and not be so uptight.

(I have a thing about children running around large groups of people. I feel it is unsafe (for the elderly who might get knocked over) and therefore better saved for the playground.)

But I was not the boss of this gathering, ignored it and visited with the other mothers.

Pizza time arrived and we said a quick blessing over the pizza.

After dinner it was time for root-beer floats made with AW root-beer. How perfect.

When plates were cleared the children started lining up for their dessert.


My back was turned, but I heard the crash.

I turned around to see Katie standing in the middle of the room, almost like standing on a stage, with root beer float all over her new outfit and in her hair and splattered all over the floor!

A little boy, running wildly, crashed right into her as she was walking back to our table and down went the float!

She stood with a horrified look on her face and her eyes quickly filled with tears.

I jumped up and whisked her off to the kitchen where I found a cloth and started wiping her down.

She did not break down but her red eyes and nose showed her dismay.

When we walked out of the kitchen a mother was waiting for Katie with a fresh root beer float and helpful moms were cleaning up the mess. It was over. The worst had happened. Katie recovered and when she and the other girls asked to run and play tag, the mothers at our table all said 'no'.

And I don't think I will ever have to explain to Katie why that is not such a good idea. 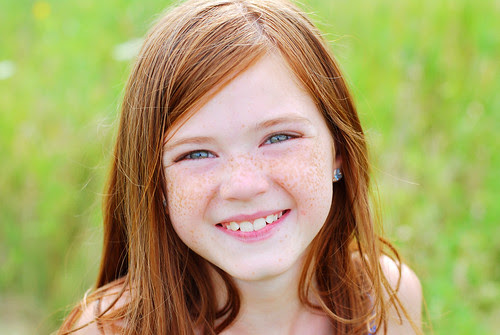 I am happy to say. You can't keep this little gal down :o)